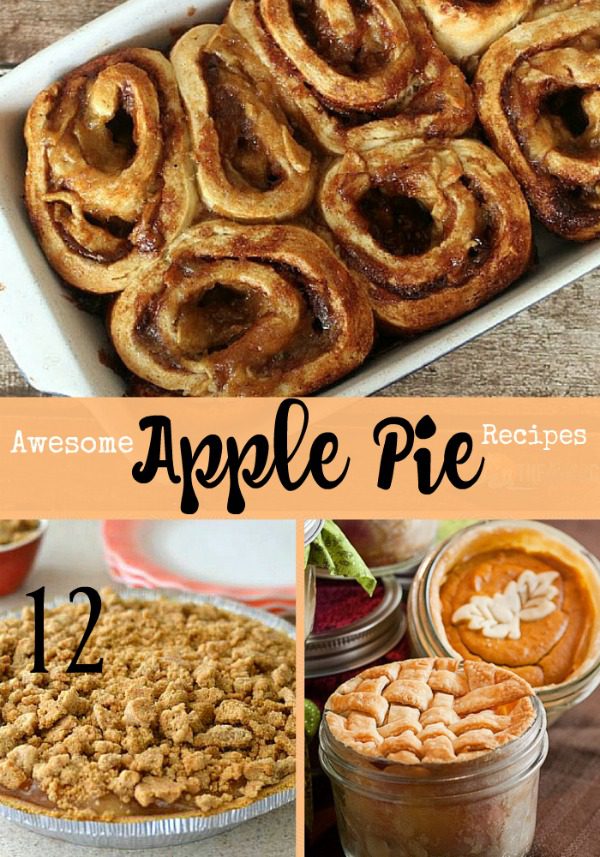 It is apple picking time and that means I will have plenty to bake with!  Apple pie is great for every part of the year but we often see it more around the fall than anything.  It’s great for a Thanksgiving dessert and I don’t know many people who don’t love it.  There are plenty of ways to make an apple pie.  Check below for a few variations we enjoyed!

Dutch Apple Pie | Cincy Shopper – This apple pie recipe is for the classic Dutch version which never fails to be a hit for any vent.

Apple Pie Dumplings | Spend with Pennies – These dumplings are not your normal every day dumplings.  Underneath these dumplings is that thick apple pie filling. Extremely good.

Apple Pie Cinnamon Rolls | The Rebel Chick – Apple pie and cinnamon rolls on their own are delightful but when you put them together, it gets even better.

Easy Inside Out Apple Pie | Flour on my Face – I had never seen an inside out apple pie and had never really thought about it until I saw this recipe.  It still looks as good as ever.

Pie in a Jar | The Nerd’s Wife – Make storing pie easier with this pie in a jar recipe! It makes for a cute display as well.

Gluten-Free Apple Pie with Crumble Topping | Gluten-Free Help – Those of us who have food sensitivities relish the idea of having a scrumptious apple pie available for our dessert during the holidays.  This recipe is perfect just for that!

Apple Pie Taquitos | Jo cooks – This is a new neat twist on apple pie.  The light crispy outside layer makes it hard to stop eating these.

Apple Pie Pancakes | Averie Cooks – Make yourself feel better about eating pie in the morning by having apple pie pancakes!

Apple Pie Cookies | Oh, Bite it! – Nothing is better than being able to hold a piece of the pie in your hand without getting messy.  With this recipe, you can! Try these cookies that have apple pie filling in the middle!

Apple Pie Lasagna | Beyond Frosting – I was skeptical about this at first until I clicked on it and I was sold on it right away.

Apple Pie Fries | DIY Cozy Home – Why not have small apple pies to dunk in caramel or to have on the go?  Apple pie is good at any time of the day, even when you’re busy!

Apple Pie Tacos | The SITS Girl – These are similar to those dessert tacos from Taco Bell.  In my opinion, they’re better!

Which of these Apple Pie Recipes will you try first?

Check our more Thanksgiving Goodies on the blog!