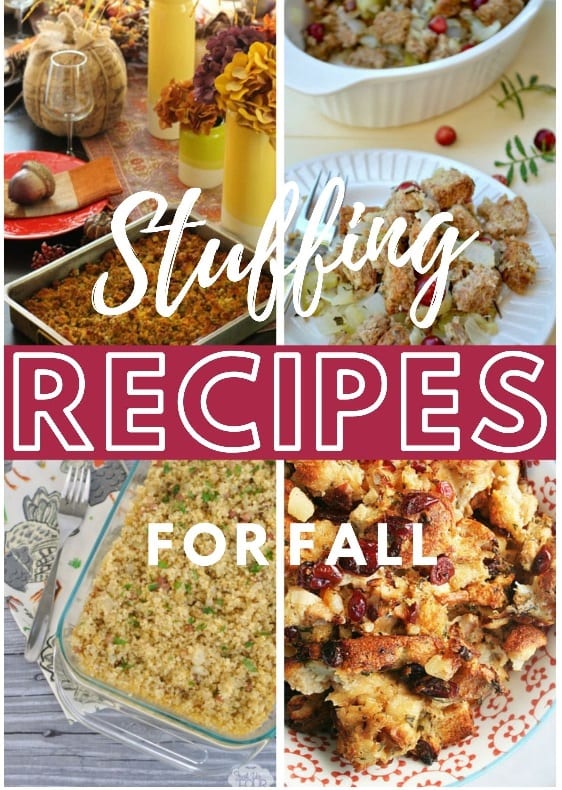 I know it’s still early but the Fall is approaching so I wanted to get a kickstart on the fall posts.  Stuffing is a staple item during the fall and especially at Thanksgiving time. It can be made in many different ways and taste great every time! Check out the 15 stuffing recipes we found to be yummy enough to share!

Quinoa Stuffing | Just Us Four – Quinoa is all the rage these days and for a good reason! It tastes great and is a healthy alternative!

Easy cornbread Dressing | A Worthey Read – Using cornbread in your stuffing is a classic movie.  There are a few ways to make it using cornbread and this is one of our favorites!

Wild Rice Stuffing | Wendy’s Hat – I had never thought about adding rice to my stuffing until I found this recipe! I’m glad I did!

Apple Cranberry Stuffing | Oh, Sweet Basil – Try this sweeter version of stuffing that uses apples and cranberries for an extra pop of flavor!

Dad’s Stuffing | Life as Leels – It’s not often you see a dad hop in the kitchen but a lot of times it’s a good thing he did! This recipe if delicious!

Gluten-Free Thanksgiving Stuffing | Fork and Beans – If you’re like me, stuffing is a no-no due to allergies.  Check out this allergy-safe recipe for your Thanksgiving!

Sage, Onion, and Smoked Bacon Stuffing | HGTV – You can never go wrong with bacon, in my opinion.  It’s a crowd-pleaser and always adds great flavoring!

Low-Calorie Thanksgiving Stuffing | Laa Loosh – Do you want to still have stuffing without worrying about all of the calories?  Then this stuffing recipe is for you!

Homestyle Sausage Stuffing | Cinnamon Spice and Everything Nice – Sausage has a great aroma and flavor.  It mixes with stuffing easily and makes it that much tastier!

Crock Pot Stuffing | Julie’s Eats and Treats – We all know Thanksgiving can be a frantic day of cooking.  Mark stuffing off your list first thing in the morning by throwing it in the crockpot!

Mom’s Turkey Stuffing | Simply Recipes – Turkey stuffing has always been one of my favorites! Great to cook in or out of the bird!

Great Grandma’s Famous Stuffing | The Baker Girl – We always loved going to grandma’s house just for the delicious cooking.  Now you can make your own version of grandma’s stuffing with this recipe!

Thanksgiving Dressing/Stuffing | The Pioneer Woman – This is a classic stuffing recipe specifically meant for Thanksgiving.  Going back to the classics is never a bad move.

Which one will you whip up for your family event?