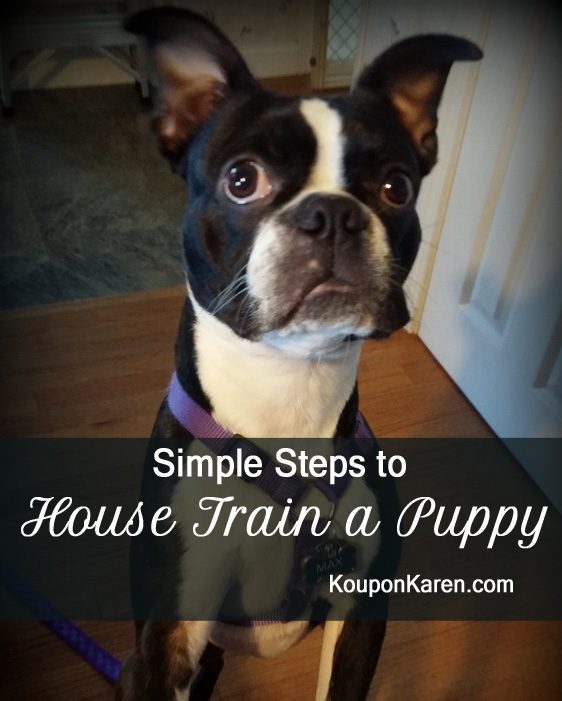 Since becoming a pet owner, I’ve learned more than I thought I would!  I’ll be doing a serious of pet posts this summer to hope those of you that are struggling with a puppy or just a new dog.

One thing I had no idea how to do when we got Max, was how to house train a puppy.  He was only 9 weeks old and barely trained.  I had successfully trained both my girls as toddlers, but a puppy was a completely different thing!  I wasn’t putting a diaper on him.

House training a puppy can be easy and humane when you follow a few simple steps.  But you must be consistent.  Make sure your puppy is at least 8 weeks old.  They shouldn’t be taken from their mother much younger than 8 weeks old.  This helps to assure the dog is properly weaned and started on soft food.  The mother will also begin training and the puppy will already have a sense that urine and bowel movements are best done outside.

When the puppy is brought home, assuming one has a back yard, take it for a walk around the perimeter to give the dog a sense of the approved boundaries. Chances are,  it will have a urine and/or bowel movement right then and there.  As soon as that happens, give it praise and perhaps a treat.

Repeat the back yard tour as often as possible.  And be on the alert for signs of the need to go back outside.

While fresh water should always be made available to a dog, particularly during the hot summer months, meal times can be fixed to morning and evening. After the puppy has eaten or drank anything, take it outside until it urinates or has a movement. Again, give it praise. A bowel movement usually happens within a half an hour of eating, although individual dogs can be different.

At night, an important thing to remember is that a dog will never soil its nest unless it is ill. Therefore, a puppy crate such as an animal carrier can be set up with a blanket, water, and a locking door.  If you are not prepared to deal with the whining sound – and many are not – then cut off the water a couple of hours before bed-time, but be prepared that the first thing you do in the morning is take puppy outside.

Accidents will happen. When they do, if caught immediately, express disappointment. There is no need to yell and never ever a need to hit. But, if even a minute or two have passed since the accident, the dog will have no idea what it has done. Rubbing a dog’s nose in it will just create a resentful, frightened companion; not a more obedient dog.

If you follow these steps with dedication, the puppy should be well-trained within four weeks.  Being consistent and loving when you house train a puppy, will assure your success!