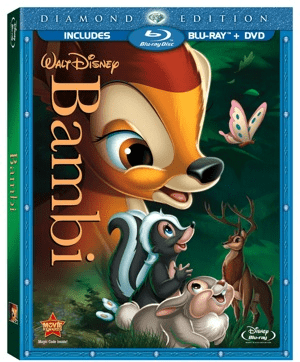 On March 1st, Walt Disney Studios Home Entertainment released BAMBI Diamond Edition on Blu-ray! Released from the Disney vault for a limited time only, BAMBI Diamond Edition features the loveable and adorable wide-eyed fawn and his forest friends in Blu-ray high-definition. Special features include 2 never-before-seen deleted scenes, a deleted song, a digital exclusive “The Golden Age” and much more!

The Diamond Edition debut of BAMBI, Walt’s fifth full-length animated classic, is an endearing tale about a young prince of the forest who learns valuable life-lessons about friendship, love, and the miracle of life. The movie is a must-own coming-of-age story that Walt Disney Studios Home Entertainment has especially packaged with families in mind – providing the ultimate, interactive hi-def home entertainment experience with a newly enhanced digital restoration, enhanced picture and sound, games, activities and more.

Disney’s new “Second Screen” technology, which is being introduced for the very first time on the BAMBI Diamond Edition release, will further transform the at-home movie watching experience by empowering viewers with the ability to engage with film content on multiple media platforms and bring them to life in their own hands at the touch of a button. By simply downloading the new Disney Second Screen App onto an internet-connected computer or iPad™* and synching it to the movie, consumers will instantly be able to dive deeper into the film by engaging with fun interactive elements like animated flipbooks, galleries, photos, trivia and more.

As morning light breaks across the meadow, a young deer named Bambi is born and hailed as ‘Prince of the Forest.’ Soon Bambi emerges from the thicket on wobbly legs, much to the delight of his new friends, Thumper, the playful rabbit, and Flower, the bashful yet lovable skunk. But the fun of nibbling on fresh blossoms and frolicking through the woods is only the beginning. Exploring his new world, and guided by the wisdom of Friend Owl,Bambi learns valuable life lessons with every adventure – experiencing the power of friendship, family, and love along the away.

Purchase Information: You can purchase it online at Amazon

and where movies are sold.

This is one movie my girls had not seen yet and I haven’t watched it since I was a kid.  It was so nice to sit and watch it with them, it truly is a great movie and I think they did a fantastic job restoring it and it looked great.

Disclosure: I received Bambi Diamond Edition on blu-ray for my review. This did not influence my post and as always, my words are my own.