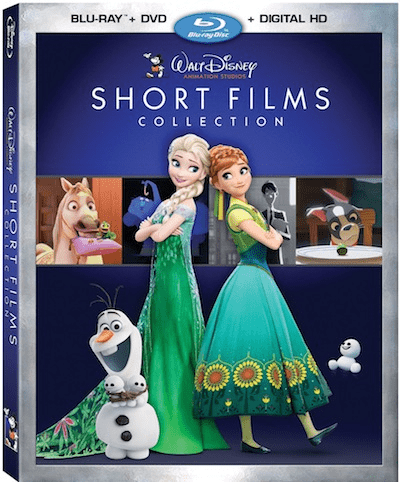 I will admit that I look forward to seeing Disney movies because of the shorts.  The girls do too.  They’ve been talking about a few of them for a while now since we first saw them.  That what is also exciting about owning a Disney movie on Blu-ray; they always include the shorts.  But what about owning a blu-ray that had a collection of shorts in one place?

Walt Disney Short Films Collection is now on Blu-ray, DVD and Digital HD and you can own all of their shorts in one place!  This collection includes:

We are so happy to now have this collection in our home library.  Our favorite short is Feast because not only is it cute, but it stars a Boston Terrier (we own a Boston and love him!).  Of course Frozen Fever is a hit in our house too.  They were so excited to see Olaf on screen again.  I also love Paperman!

Here is the trailer for the Walt Disney Short Films Collection:

Have you ever wondered what it takes to make one of these shorts?  With this collection you’ll get an Bonus Feature @DisneyAnimation which is an inside look at the process of developing and producing a short.

You can find the Walt Disney Short Films Collection this in stores now!