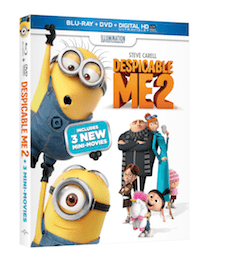 On December 10, 2013, Universal Studios Home Entertainment is releasing DESPICABLE ME 2, the $863 million worldwide box office phenomenon and the year’s #1 comedy, on Blu-ray™ and Blu-ray 3D™ Combo Packs, DVD and Digital HD including UltraViolet™!  Bonus features include three all-new mini-movies featuring the mischievous but lovable Minions, deleted scenes, a closer look at the evil minions and much more!

We saw this earlier this year and LOVED IT.  I think it was even better than the first one!

If you missed it, here is a sneak peek.