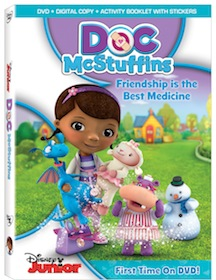 Product Information:   Disney Junior’s newest hit animated TV series geared to kids ages 2-7, “Doc McStuffins,” will be available for the first time ever on Disney DVD and Digital Copy, August 21, 2012.  Sure to become a fan favorite with parents and kids alike, “Doc McStuffins: Friendship Is The Best Medicine” includes a DVD featuring five full length episodes, each consisting of two 11-minute stories, a Digital Copy of the episodes – perfect for kids to watch anytime, anywhere – and also comes packaged with Doc’s special Big Book of Boo-Boos with fun activities plus character and boo-boo bandage stickers.

The characters and themes featured in “Doc McStuffins” are all made to be relatable to young viewers and are designed to ease kids’ trepidations about everything from a doctor’s visit to removing a splinter.  Many of the stories directly address the kinds of issues that parents face with their young children when it comes to good health, hygiene and trips to the doctor’s office. It’s the perfect series to have on-hand and add to your home entertainment collection.

EPISODES FEATURED ON THE DVD:

The DVD contains five full length episodes, each consisting of two 11-minute stories, that highlight some of Doc’s favorite toys.

My Thoughts:  We have our own Doc McStuffins in our house!!  My 5 year old is a big fan, and has been since she watch the first episode!  I call her Doc McAllison and she loves it.  She was so excited to not only receive the DVD which also came with a Digital Copy for mom’s iPad, but they also sent her some Doc McStuffins play stuff so she could play Doc McStuffins.  She couldn’t wait to get home and put it all on!

She immediately pulled out her animals to give them all check ups.  Of course her favorite Zebra got the best 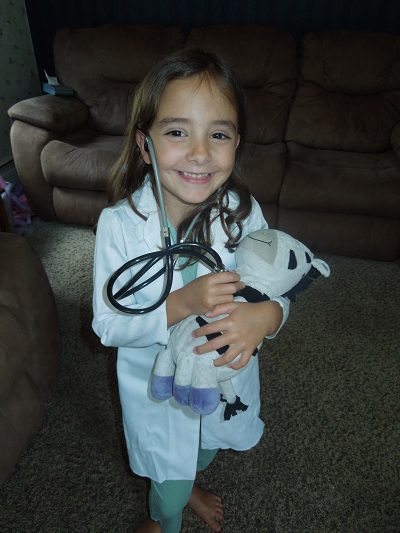 check up possible.  I listened to her while she played and she was reiacting the show and doing the things that Doc does like giving hearing tests, checking their temperture and listening closely to their hearts.  It was really cute.

Then later on she watched the DVD with her sister (who is a closet fan, she hates to admit it out loud because it’s for kids – after all she’s almost 8! LOL)

I love that that they have 10 episodes on this DVD and the digital copy comes in real handy for on the go rather than lugging the DVD with us.   I watched a few episodes with her and I love the way Doc is so helpful and the compassion that she shows to her ‘patients’.  Good qualities for kids to learn from the shows they are watching.

(1) Koupon Karen reader will win a copy of Doc McStuffins: Friendship is the Best Medicine on DVD!