E.T. The Extra-Terrestrial on Blu-ray Review + E.T Activites and Recipes 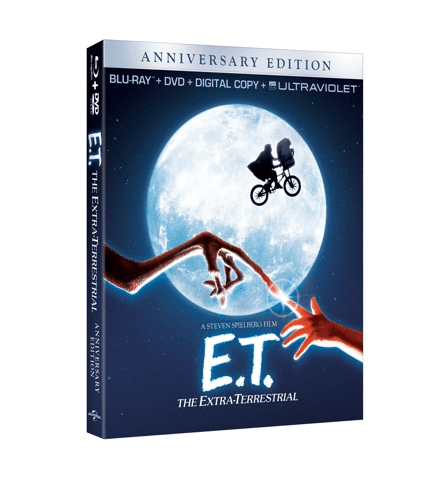 Product Information: E.T. The Extra-Terrestrial, Academy Award®-winning director Steven Spielberg’s magical adventure, celebrates its 30th Anniversary with its first-ever release on Blu-ray™ October 9, 2012. Featuring an all-new, digitally remastered picture that delivers six times the resolution of DVD, as well as all-new 7.1 surround sound, the E.T. The Extra-Terrestrial Anniversary Edition Blu-ray™ Combo Pack includes the 1982 theatrical movie, an all-new interview with director Steven Spielberg, and “The E.T. Journals” featuring never-before-seen footage from the set of the film. The Blu-ray™ Combo Pack also includes UltraViolet™, a DVD and a Digital Copy of the film, offering fans a chance to relive the mystery, laughter and wonder of the iconic movie anytime, anywhere on the platform of their choice.

“When E.T. The Extra-Terrestrial premiered in 1982, it captured the imaginations of people young, old and everyone in between in a way that was unparalleled in modern movie history,” said Craig Kornblau, President of Universal Studios Home Entertainment. “A global cultural phenomenon—and the biggest box-office blockbuster of its day—E.T. brought out the child in all of us. We are thrilled audiences will now be able to experience the film in the astounding quality of Blu-rayTM.”

BONUS FEATURES ON THE E.T. THE EXTRA-TERRESTRIAL ANNIVERSARY EDITION BLU-RAY™:

BONUS FEATURES ON THE DVD:

Universal is also partnering with leading independent games publisher Chillingo to publish E.T.: The Green Planet for the iTunes App Store. Inspired by a novel based on a story by Steven Spielberg, players travel with E.T. to his home planet, explore and build extraordinary intergalactic botanical gardens, and share their experiences with friends.

When an imaginative boy meets a lost alien, it is the beginning of one of cinema’s most endearing friendships, as Elliot (Henry Thomas) helps the marvelous creature he calls E.T. find his way back home before government agents can capture him.

My Thoughts:  I saw E.T. when I was a kid and I remember loving it.  It really was such a great movie and I even remember my grandmother coming with us and she loved it too!   And for back then the effects were amazing.  Of course now we watch it and movies have evolved so much but the kids loved it and it’s still a great movie.

They did such a great job with the digital remastering of this movie and the quality was pretty amazing considering how long ago this movie was originally made.  I seriously sat there for the first 20 minutes of the movie and was just amazed at the quality. I kept saying to my husband -look at that, look at that!  And I remember the original movie was very dark, and this one wasn’t as dark, you could see the picture much better.   They did a GREAT job!

Here are some fun Activities for the kids and also a fun recipe for some out of this world snacks!  Just click the images below to download them.