General Mills ROCKS!!  I think I said that last week when I briefly spoke of my trip.  But they really do.

I’m back from my 36 hour trip to MN to attend General Mills first ever blogger eat & greet and let me tell you we did eat and we did greet!! Lots of both. First I want to say that the people at General Mills are some of the nicest, down to earth people I’ve ever met. They made us all feel so comfortable and they really did want to hear what we thought about their products. It seems like a great company to work for and everyone I talked to really enjoyed their job.

My trip didn’t get off to a great start. After leaving Providence I had a connecting flight in Chicago and we arrived 15 minutes late. My flight to MN was leaving in 20 minutes. I don’t know if you’ve ever been to O’Hare but it’s a HUGE airport and wouldn’t you know the gate I arrived in was about 50 million miles away from the gate I was leaving from. Needless to say I moved along as fast as I could but I had  sandals on, my purse (full of stuff) and laptop and lets face it, I can’t really run to well. I thought about taking my shoes off because that would of helped me to move along a little faster but Ididn’t want to look like an idiot running through the airport bare foot. I pushed and pushed to move as fast as I could but it didn’t work, I missed my flight. I was almost in tears when I reached the desk and the lady (who wasn’t very nice I’d like to add) told me that my flight was just pulling away. OK now let me explain something. My flight was scheduled to leave Chicago at 1:30pm. I got to the gate at 1:29pm according to their clocks that were plastered everywhere. Now tell me this, is that normal for them to leave the gate 1 minute early when they know at least 1 passenger isn’t there? Don’t they know I had a connecting flight that was late? I mean technology is wonderful I’d hope that they knew but even if not she really didn’t seem to care, now I was going to be late.

After I composed myself and caught my breath a little bit I called my husband and he calmed me down, assured me it happens, it was no big deal and now that I look back it really wasn’t.. I then called my contact Allison from My Blog Spark and told her that I’d be arriving later than planned. She arranged to have a car waiting for me that would bring me right to dinner. This meant I wasn’t going to be able to change or freshen up but there was nothing I could do about it.

My driver, Byron was waiting for me in a nice black town car that had a sign on the windshield “K. Wilmes”. Would you believe I didn’t get a picture of it!! I’m so bummed, that’s not something I see very often and may not again. But I felt special and Byron was really nice. I changed into my sneakers because I had blisters on my feet from running in my sandels. Oh well not much I can do about it now. I hate wearing sneakers with capris but at this point I really didn’t care, I was just happy to be there and on my way to dinner. Did I mention that United Airlines doesn’t serve food on their flights. Not even a bag of oyster crackers. About now it’s 5pm local time in MN (6 pm my time) and All I’ve had was an egg sandwich in Providence at 10:30 am and a pack of crackers on the plane that I had with me. That was it!!! I was hungry and I had a headache, but I kept on smiling because I was about to meet some of my blogging friends in person, some other cool bloggers and the wonderful people of General Mills and Coyne PR who manage My Blog Spark. All was good!

We met at the Mill City Museum for cocktails, a 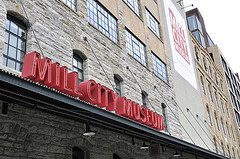 tour of the museum and then dinner. I couldn’t really walk around to well but I did my best. It was fun mingling with the bloggers and putting faces to names. I met up with my buddy Erin (JANE4Girls $800 Annual Budget) and then I chatted with ,Kim (STL Mommy), Alissa (Keeping the Kingdom First) and Becky (Nickels – n – Dimes). Finally it was time for dinner and let me tell you it was excellent! Did I already mention that General Mills ROCKS? Yup they do!!!
After dinner they brought us back to the hotel because we had an early day the next day. It was about 9pm when we arrived there and I did think about going to bed right away but then I saw some gals in the jacuzi (the scene of the drowning iphone) and I thought my feet could really use that nice hot water, so I called Erin (jane4girls) and we sat at the jacuzzi chatting with Clair (Mummy Deals), Dawn (Because I Said So) and Liz (This Full House) Awesome gals, loved them all. We hung out there until about 10 PM and then I needed to head to bed, it was 11 o’clock back in RI and that’s the time my body was going by.  It had been a crazy day, but fun.

I was up by 5:45 AM because we were meeting in the lobby to check out and head over to General Mills at 7am. Early day for sure, especially for this SAHM but when you don’t have 2 little ones to get ready to go, it’s much easier. I mingled with more bloggers in the lobby and met Christine (Northern Cheapskate).

General Mills wasn’t too far from the hotel so were got there pretty quickly. The Pillsbury Dough-boy was there to greet

us and we took our picture with him.  At first we thought it was a blow up mechanical Dough-boy but then we found out there was someone in there. Didn’t see that coming at first.  This is my buddy Amy from Webfloss who I got to meet for the first time on this trip.

Then we had breakfast.  I was surprised when I saw a very light breakfast.  I guess I expected more but soon after I realized it was because after that we were heading to the Betty Crocker kitchens to taste some new products.  Good thing I didn’t eat more than I did.

You can read Part 1 on my thoughts of the products we tried out here. Everything was so good.

After that we took a trip to the General Mills company store and I grabbed a T Shirt for my 4 year old and a book for my 2 year old.   They also sold pretty much all the General Mills products in the store.  I didn’t think to look around there, just figured I can get it all at home.  Well I found out afterwards that they sell Frankenberry cereal in the store and my husband loves that.  We can’t find it anywhere.  So I emailed my buddy Brandie from Free Sample Freak who was going to the Table Talk event just a few days later to grab me some.

The building is HUGE.  They have everything available to their employee’s so

they never need to leave except to go home of course.  There is a coffee shop, deli, full cafeteria, bank, hair salon, gym, day car, doctor’s office and more.  It’s like a mall with everyone walking around and they have tables through out the building where there were people sitting with their lap tops doing work.  Including outside in the sun.  How cool is that!

Then we were off to check out the Betty Crocker Photo Studio.   The

first room we walked into was the Prop Room.  I never really thought of them having a Prop Room but when you think of all the dishes/plates/pans/napkins/silver ware and more that goes into every picture then yeah they probably need a prop room.  This was my favorite aisle with the rainbow of colors, so cool!

They showed us the different techniques involved in taking a picture for their new recipe book Pot Pies & Casseroles and how they use the light or filter the light or perhaps block the light.  I’m not a food photographer but it was really cool to see how they do it.  They also have different ways to get the perfect slice and to keep the food looking most and yummy even after a day of shooting.  I will never look through a recipe book again the same.

Finally it was lunch time and we headed back to the Betty Crocker kitchens where they had a fabulous hot lunch waiting for us.  They even made one of the recipes out of the Pot Pies & Casseroles cookbook – Chipotle Pork Roast.  We also then had a chance to mingle with some of the staff members and get our pictures taken wit the Trix Rabbit and Lucky Charms Leprechaun.  I finally caved and let them take my picture.

By 2 pm they started busing us back to the airport to catch our flights home.  I was barely there 24 hours but it was such a fun and exciting 24 hours.

In the next few days I will be posting a Giveaway for some Box Tops for Education that I ‘gathered’ while I was there.  I will explain more in the giveaway post.  Keep your eye out.

(My trip was fully funded by General Mills but that has no affect on how I felt about the company; these are my own thoughts and feelings.)