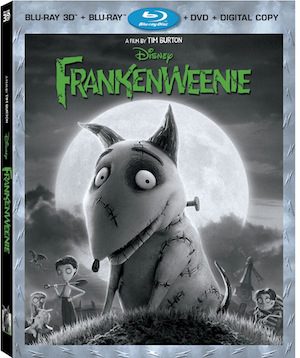 Frankenweenie hit the stores in a 4-Disc Blu-ray™ Combo Pack, Digital and On Demand on January 8, 2013.   Another must-see Tim Burton film – we love him!..  The hilarious 3D stop-motion animated masterpiece is filled with quirky characters and unexpected twists.

From Disney and creative genius Tim Burton (“Alice in Wonderland,” “The Nightmare Before Christmas”) comes the hilarious and offbeat “Frankenweenie,” a heartwarming tale about a boy and his dog. After unexpectedly losing his beloved dog Sparky, young Victor harnesses the power of science to bring his best friend back to life—with just a few minor adjustments. He tries to hide his home-sewn creation, but when Sparky gets out, Victor’s fellow students, teachers and the entire town learn that getting a new ‘leash on life’ can be monstrous.

We loved this movie and laughed a lot.  But the girls now want to go right to the bonus features in just about any movie we see now.  They love the extras and this time their favorite was the Frankenweenie Short with Captain Sparky.  I loved Miniatures in Motion and usually enjoy seeing how they pull these movies together.  Amazing the work that goes into them.  And of course the music video Pet Sematary was fun for the girls to get up and dance with.

Love this movie and you should see it for sure!