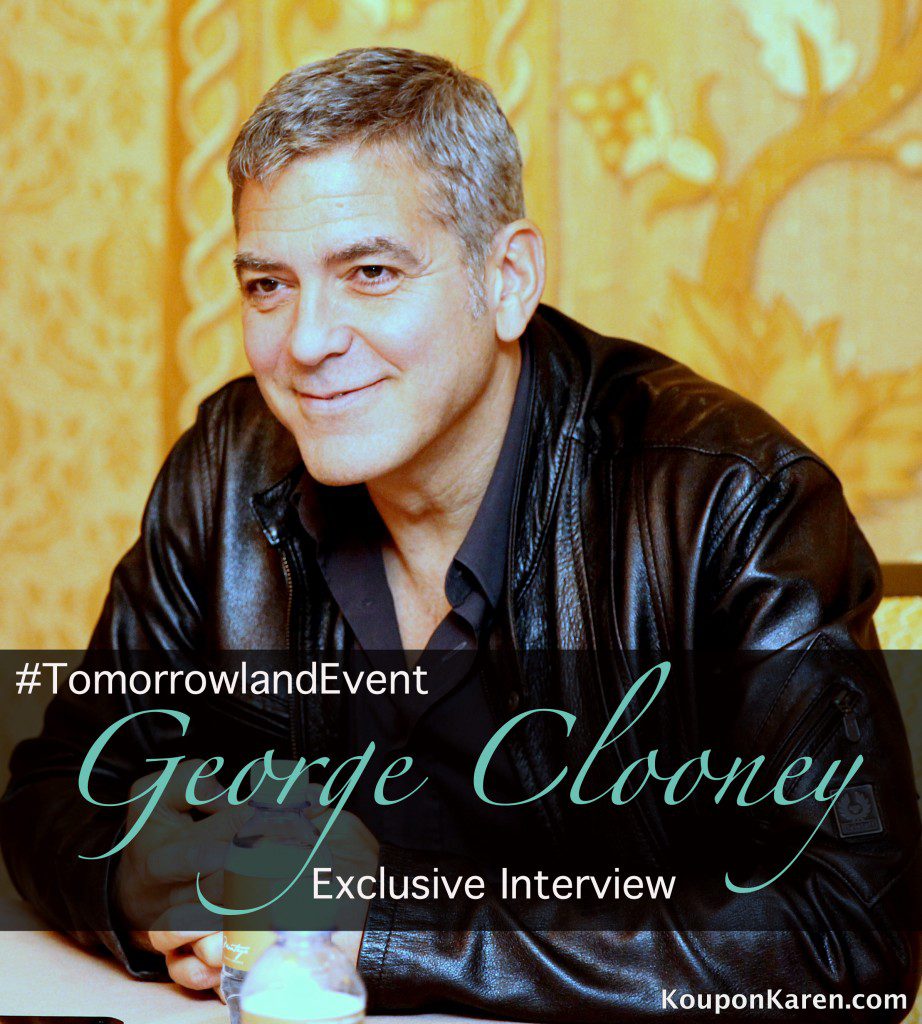 Disclosure: I received an all expense paid trip to Los Angeles California for the #TomorrowlandEvent.  All opinions are my own and were not swayed by any outside sources!

Last Friday morning I found myself, along with 24 other bloggers in Beverly Hills walking into the beautiful Montage Hotel sitting in a conference room, anxiously awaiting our TOMORROWLAND interviews.  As I sat there I felt like I needed to pinch myself.  Was I really here?  Was I really in Beverly Hills ready to meet a very talented and famous actor?  How did I get here? 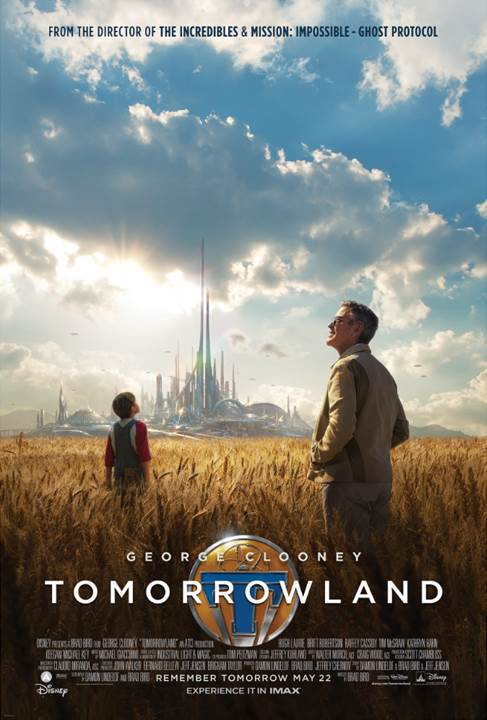 Who were we waiting for?  We were waiting for George Clooney to enter the room!!  He was going to sit at the head of the table and I was only 1 seat away from him. 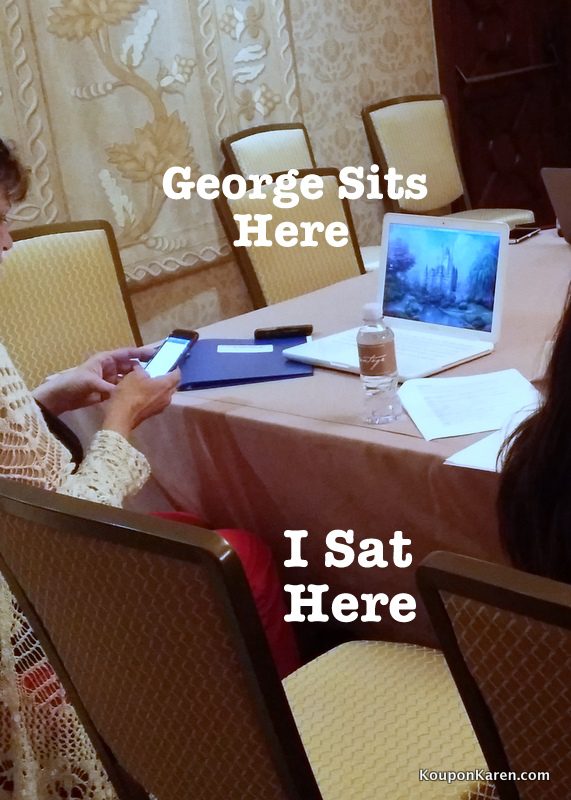 I kept imagining what it would be like when he arrived.  I’ve met other famous people before, but for some reason this one was different.  This was someone who was not only very talented, but someone whose career I’ve followed for a long time and I was actually going to get to interview him!  Not to mention sit only a few feet from him!!

And then the room broke into applause as George Clooney walked into the room, even more handsome in person than I imagined.  He seemed a bit amazed by our group of mommy bloggers and immediately started joking about the big conference table “I have never seen a table this long.”  We all broke into laughter – talk about breaking the ice!  He then says  “Alright, we have time for one more question.“ Again laughter.  I should have known then that we were in for a good time.  “So you are Mommy Bloggers?  Really!” George asked us.  We were there to interview him and it seems like maybe he was there to interview us.  He went on to ask us how long we’ve been a group.  I wanted to say “Well, you see George we aren’t really a group we are all individual bloggers and happen to be in this lucky group of people who get to meet you!”  But the group replied pretty unanimously “2 days” and it seemed to surprise him “Really?  Are you kidding?  Uh oh.   This could be really dangerous. ” said George.  And then we were off!

He sat at the head of the table, looking comfortable and confident and said “Okay, so fire away.  I’m ready.“

As the first question was asked, he sat there listening intently, shaking his head and I was immediately reminded of Doug Ross from ER.  It’s like I was transformed back in time (rather than into the future)!  The message in TOMORROWLAND said a lot – “Can we fix it?”  And [as we know] you firmly believe in that with all your humanitarian work.  Is that one of the things that drew you to the movie?  “It is.”  He goes on to say “at first I wanted to work with Brad Bird.  I think he doesn’t make bad films, and I just love the kind of films he makes.  And then when I read the screenplay, what I love about it is that we sort of are inundated in our lives with lots of bad news.  You turn on the television and it hurts, you know.“

“And it’s a bad time and what I loved was the idea of the script said that the future isn’t just automatically inevitable.  And you have to participate and you don’t have to just accept how it ends.  I’ve grown up in an era where the individual actually had effect, you know, the civil rights movement, the Vietnam movement, the women’s rights moments, so I always felt like and believed that there was a version of it.“

“I was raised where you could affect the future, and you didn’t have to just accept it.  The Russians weren’t going to necessarily just blow us all up with nuclear bombs.  I really loved the idea of hearing this idea that we’re not just necessarily doomed, that there’s something you can do about [the future] if you pay attention and you work hard.  And I liked it.“

George isn’t a stranger to working with contraptions and harnesses and all those things.  He has done it a few times in the past on movies like Gravity and a few other films.  We asked him if that’s difficult to do?   He explained “I’ve never particularly been in love with it.  Green screen is tricky because you just have to sort of make things up. But the thing about being an actor is you really don’t ever have to grow up, right?  We’re still playing make-believe.  I’m 54 years old and I’m playing make-believe.”  I loved that!  I could tell at that point that he really enjoys what he does.

He goes on to tell us “when they put you in a contraption and say ‘now you’re gonna fly’ it’s like you’re still a 12-year-old boy and you go ‘really, am I gonna fly from here to there?’  Oh yeah, let’s go this is fun!  I’ve always found that part to be magical.  I just wish the jet pack [in the movie] really worked.” he laughed and went on to say  “When I was growing up it was the space race with everything,  you were eating space food sticks and drinking Tang and I really thought by now we’d be riding around in Jetson cars!“

We asked him if a jet pack would be one of the futuristic items or things that would be awesome to have.  His answer was classic and had the entire room laughing.  He laughed and said “Let me put it to you this way.   So you’re at LAX.  You get your bags and have to get to Studio City and it’s 4:30 pm on a Friday.   It would be the greatest moment ever to just blast right over all the traffic.  He thinks for a moment and then adds “although I don’t know that I want everybody to have one because they’d just be circling my house yelling “Hey, What’s Amal gonna wear to the MET Ball?” I don’t know if I want everybody to have a jet pack.”   The entire room broke out in laughter.  It wasn’t just what he said that was funny, it was the way he delivered it.  If I didn’t know any better, I’d think he was a stand up comic because he truly is hilarious!

The actor that plays a young Frank Walker in the movie, Thomas Robinson looks so much like George.  It’s pretty amazing!  We wondered if he had any say in who played that role?   The actor looks just like him – facial expressions and all.  We asked George if Thomas studied him to play this part?

Surprisingly, George said “No, they just did a little plastic surgery on him.” Once again, laughter filled the room.  He then went on to say  “Which seems a little rough, but it’s show biz.  You want to be in show biz, we’re gonna have to reduce that nose.  We’re gonna have to pin those ears.  I’m sorry!”  He’s so funny and his delivery is right on.   George then got a little serious and said  “No, he was funny.  I never got to work with him obviously, because we were in different worlds but he would walk by [me] and I’d say ‘So you’re me, right?”  He’s like, ‘yup!”.  Alright.  Don’t screw it up!” George added that Thomas was a sweet,  funny kid.

The laughs didn’t stop there!  When asked what his favorite scene was in the movie, he began by first telling us how he came to this part.  “Brad and Damon called me and said we’ve written a part for you in a movie.  And I’d been trying to work with Brad for a long time.  I was like wow, that’s amazing.  They sent me the script and the description of me is – 55-year-old angry, bitter, guy.  I’m like ‘thanks guys!’.  Thank you so much.”  LOL

“But what I loved about the character was that the entire film he’s just a grump, you know.  He’s just a grump through the whole thing.  I loved when Britt first comes to the house.  It’s really fun when he says things like ‘shut up’ and ‘who are you? ‘ We really had fun shooting all that stuff in the farm-house.  I think that might have been the most fun scene to shoot, all the farm-house stuff.“

We asked George what would be the message of this movie to inspire teenagers?  He said “The idea is that the future is yours and the future is yours to decide what it will be.  As you look at the world and you see how tragic it can feel, and you know it has always has been that way. It wasn’t particularly great in 1968 either.  There were assassinations and there were wars and civil unrest and riots, but we weren’t as inundated with it, and there was always still a hopefulness that the future was still gonna be alright.  And I feel as if we have to get to that point where, we all understand that the individual is not helpless.  And I think that’s a really important part of this.“

He goes on to say “An advantage I’ve had since I’ve become successful is that I understand I have a voice that can amplify things, so there are things that you can do that you can try to affect change with.  But I was like that when I was 10, because I was told that your voice has to matter and has to participate even if only two people hear you because those two people may change.”

And then the question came up about props and memorabilia from the movie.  We asked him if he kept anything from the set of TOMORROWLAND?   George once again had us in hysterics with his answer “Now here’s the thing” he says laughing “Disney has armed guards around all that stuff.  And Brad Bird is very possessive of all those things as well so I will not answer what I stole, because they will come and take it away from me, but it shoots rays…… and it’s a gun.”

I’ll end it on that note for now! The interview had a little bit more but I don’t want to spoil it for anyone who is going to see the movie (hopefully you all will!) so after the movie is released I’ll share more of the fun morning we had with George Clooney at the Montage Hotel in Beverly Hills California.

Here is the trailer to help you get excited over it!