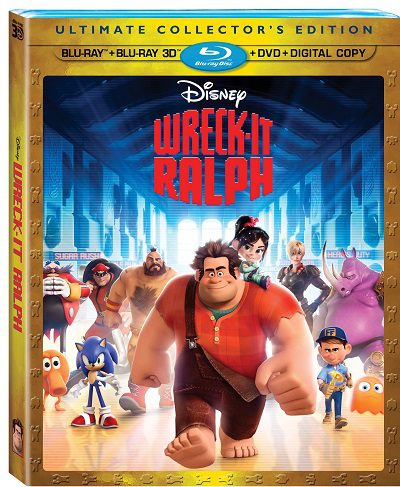 We are very excited about the release of the Wreck-It Ralph Blu-ray combo pack!  The girls saw this in the theater with their grandmother and have been talking about it ever since!  Disney has blown it out of the park again with another great movie and a great Combo Pack.  The Ultimate Collector’s guide includes a Blu-ray, a Blu-ray 3D, a DVD and also a Digital Copy.  They want to make sure you can watch it every single way possible!

From Walt Disney Animation Studios, “Wreck-It Ralph” takes viewers on a hilarious journey.  For decades, Ralph (voice of John C. Reilly) has played the bad guy in his popular video game. In a bold move, he embarks on an action-packed adventure and sets out to prove to everyone that he is a true hero with a big heart. As he explores exciting new worlds, he teams up with some unlikely new friends including feisty misfit Vanellope von Schweetz (voice of Sarah Silverman).    The film is directed by Emmy®-winner Rich Moore.

There is an amazing cast in this movie and the voices fit the characters so well.  Jack McBrayer is the voice of Fix It Felix, Jr. and Jane Lynch is the voice of Sgt. Calhoun.  I love both of them and they were perfect for these parts!  One of my favorite parts of the Combo packs is always the bonus features!!!  These bonus features take viewers even deeper into the world of video games and Disney’s “Wreck-It Ralph” has something for every player. Over an hour of all-new bonus material is featured on the Digital and Blu-ray Combo Pack, including deleted and alternate scenes, the theatrical short “Paperman,” plus much more.  The deleted scenes are always a favorite of mine and I especially enjoy them in cartoons!

Here are some fun activities for the kids…