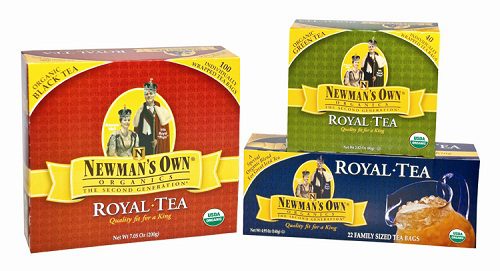 New Newman wanted to add a tea to their product line but waited until they found the perfect company to give them the high quality of organic tea she was looking for!  Nothing but the best for her customers.  Harris Tea Company, with over 200 years of tea procuring and blending experience was the winner!  Because they know the tea plantations the tea is sourced from, Nell is sure that they are offering quality organic tea to her customers and at reasonable costs too!

Of course the boxes carry the USDA Organic Seal and are available in supermarkets across the country:

I found this quite interesting – “According to the Tea Association of the USA, Americans consumed well over 50 billion servings of tea in 2006; which is over 2.25 billion gallons.”  That is a lot of tea!!!  While some drink tea for simple enjoyment, others know that black and green tea contain flavonoids – naturally occurring compounds believed to have antioxidant properties. There is a growing body of international scientific research about tea’s healthful properties and its potential roles in many areas of well-being. For many, however, it just tastes good and is a versatile pick-me-up. From starting the morning with a brisk cup of black tea to iced tea with meals and a cup to relax with later in the day, tea is a perfect day-long beverage throughout the seasons.

I know lots of people who drink tea because of the antioxidants and lots that drink it for pleasure as well.  My husband has tea everyday and a few cups at that.  While he doesn’t enjoy green teas, he does enjoy pretty much everything else.  He tried some of the Organic Black Tea and really enjoyed it.  He loved flavor and said he’d drink it more often if we had it in the house.   While I’m a big coffee drinker, I like tea occasionally especially when I’m sick.  This tea arrived just in time because I’ve been battling a cold and sore throat on and off for a while now.   The Black tea was very good and very soothing!  I drink my tea straight up with no sugar or milk so I was able to fully taste the black tea.

My mother is big into Green tea so I shared some with her and another friend who also drinks Green Tea.  They both enjoyed it very much but my friend, who enjoyed it very much,  said she had to use two tea bags at once or it was too weak for her.  My mother was fine with one, she seeps it and lets it get cold then adds ice.  I’m guessing that she enjoys it weak already if she adds ice to it.

Have you tried any of the Newman’s Own Organic Royal Teas?  If so I’d love to hear what you think of them!