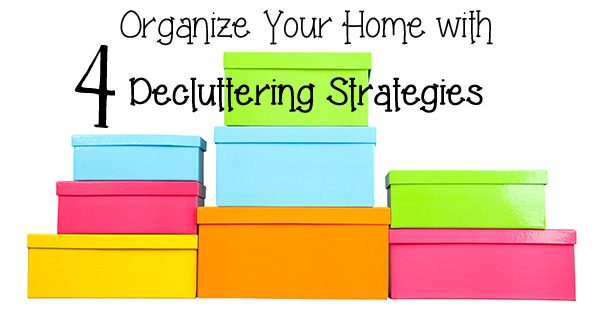 I am forever trying to organize and then organize again! When we moved 2 years ago, I got rid of a lot of stuff.  Our last house was smaller and therefore a little bit cluttered – something like these small apartment organization tips and tricks would certainly have come in handy in that space!  After being here for a while, we’ve become more comfortable with the space and things have been “collecting again”.  So in an effort to get more organized this summer, I’ve been trying to declutter where clutter has collected.

The first basic rule of decluttering a home is, that if something hasn’t been used or even seen in two years, it is unnecessary.  Get rid of it. This applies to everything except for fire extinguishers and medical emergency kits. With these two items, be sure they are inspected annually.

With the above then as a broad principle, how should one proceed?

Decide on Declutter Day a good three weeks in advance and then inform the family of its impending arrival. Why? Well, there are those three-quarter finished jigsaw puzzles, and that torn apart old TV set that son and daughter started to build/destroy. They have 21 days left to get maximum enjoyment because, after that, they’re gone! P.S. No one in the history of mankind has ever completed a jigsaw puzzle twice; so don’t expect to be the first.

IT’S NEVER COMING BACK IN STYLE

Not that skirt, nor those ties, and oh dear may he never wear that suit again! If someone does lose enough weight to squeeze back into that outfit, it will just cause a memory of the mild depression that caused the weight gain in the first place. It’s not a classic piece of clothing; it’s a Halloween costume warming up in the bullpen.

START AT THE EXTREMITIES

The attic and the basement are the snowdrifts of the home. This is where unwanted things go to mate and propagate. As a corollary to the Two Year Rule, anything that has sat in the same spot in either attic or basement (check the dust rings) is hereby evicted! Doing this will give one the needed moral conviction to attack the bedrooms, closets, and whatever strange boxes are under the sinks.

THE RULE OF FIVE

But do remember that there are precious things one cannot bear to part with. Everyone in the family gets five ‘saves.’ But do note that there needs to be a strict interpretation of this. A pair of godawful shoes is one item, not two; but a stack of old K-Tel Greatest Hits LPs when the house no longer has a turntable is 37 items, not one.