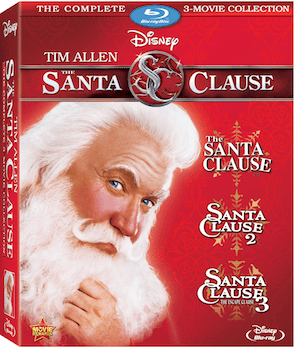 Product Information:   Have three times the fun as you celebrate the season with the complete Santa Clause trilogy – now available for the first time on Blu-ray in one spectacular box set! Superstar comedian Tim Allen delivers the perfect gift as he stars as the big man, himself, in three warm and wonderful movies about discovering the true magic of Christmas. See how it all began with Disney’s original classic, and hop on Santa’s sleigh for an exciting ride filled with belly laughs and family fun.

Christmas gets a little nuttier when Scott Calvin unknowingly inherits the role of the legendary St. Nick. His ordinary life snowballs into a hysterical series of outrageous events as he fills out his Santa suit, meets the future Mrs. Claus and faces his ultimate test against the mischievous Jack Frost. With a blizzard of bonus features and three magical movies, this three-disc box set is hours of holiday entertainment your whole family will enjoy again and again.

The Santa Clause 3: The Escape Clause

My Thoughts:  I am a big fan of Tim Allen and Holiday movies so needless to say, I’m a fan of The Santa Clause movies!  After seeing the first one many years ago, I’ve probably seen it every Christmas since and I still enjoy it.  The girls were excited to see it as they hadn’t seen it before and they loved it.

I was concerned at first if more questions about Santa would come up but really it just made sense to them and the only thing they found funny was that if this could happen to their daddy, how cool would that be if he took over for Santa one day!

This is a great movie collection that we will treasure for a long time, and then some.

I loved the bonus material on all 3 DVD’s but my favorite is the Blooper Real.  The seriously look like they have way too much fun making these movies, and I’m sure with Martin Short on the 3rd movie, there were a lot more bloopers than they showed us!