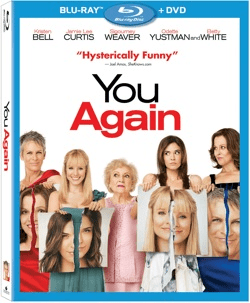 For Marnie (Kristen Bell), high school was a horror movie, and her brother’s wedding is the sequel when her archrival comes back to haunt her as his bride. Its nice girl versus mean girl in this hysterical reunion with the one person Marnie would really like to forget. And if that weren’t enough, Marnie’s mom (Jamie Lee Curtis) reunites with her own high school nemesis (Sigourney Weaver). Complete with hilarious, never-before-seen bonus material, You Again is one crazy comedy that’ll keep you laughing again and again.

In the clip below, Jamie Lee Curtis and Sigourney Weaver show up in the same dress but Jamie Lee doesn’t realize at first what’s happening and just enjoys everyone looking at her. So funny!

This movie was awesome.  A great chick flick but I’m sure those guys that are romantics at heart would enjoy it too.  It’s funny from the beginning to end.  I think Kristen Bell did a great job playing Marnie and keeping in character with her.  I loved Jamie Lee Curtis as her mom.  I don’t think I’ve ever seen a film I don’t like with Jamie Lee Curtis in it!   Though some parts of the film were a little predictable I still enjoy it but I will admit, I wasn’t sure how it would end.  I don’t want to give any of it away but it’s really good!  Happy ending of course!

Purchase It: You can purchase it on Amazon

or where movies are sold.

Giveaway: (1) Koupon Karen reader will win a copy of You Again on Blu-ray + DVD Combo Pack!!!

Details: This giveaway is open to US Residents and will remain open until March 1st at 11:59 p.m. EST . Any comments left after this time will not be counted. The winner will be selected randomly and will be notified via email and will have 48 hours to claim their prize.

Disclosure: I received the same prize for my review. This did not influence my post and as always, my words are my own.