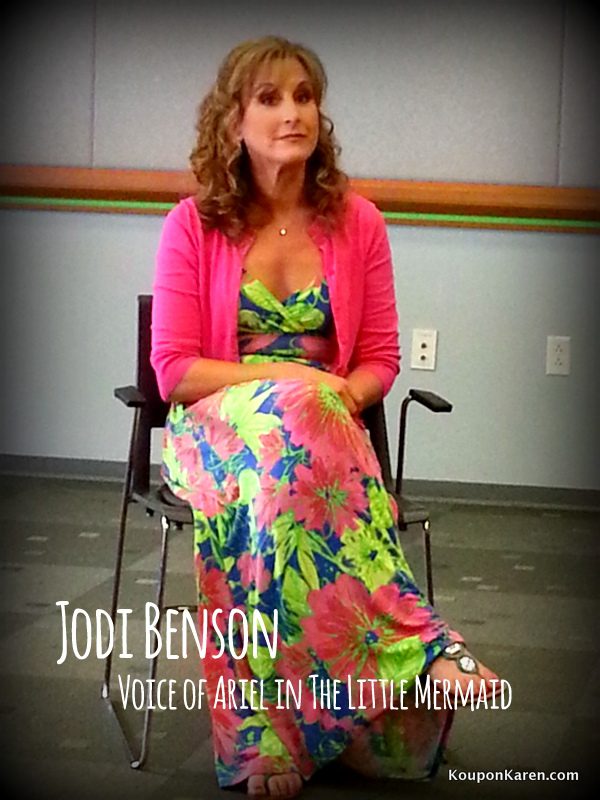 I saw the Little Mermaid for the first time 24 years ago and I loved it.  But if I could go back to 16-year-old Karen and tell her that when she was 40 she’d be able to meet Jodi Benson, voice of Ariel and actually get to ask her questions and listen to the story of how she became the voice of a Disney Princess, I would have never believed it.

But this past summer on my trip to LA ( a trip I will always remember!) I met Jodi Benson and she even sang for us.  I thought for sure I was watching the Little Mermaid and at that point I couldn’t wait to come home and watch it with my girls.  Honestly before this trip came about, I didn’t even know the name of the person who voiced Ariel.  But once I knew I was going to meet her, I was super excited!

Let me start off by saying she is absolutely beautiful inside and out!!  She is the kind of person you want to be friends with and have as a friend!  And she reminds me of Ariel.  We had an opportunity to ask her questions and I asked her if she ever played Ariel in anything or even dressed up as her since she resembles her so much.  She said she did once unofficially try on the dress and have a picture taken in it, for her own personal use but that was it.   She sees herself and Ariel as two separate people since she just voices her.  I can completely understand that but I would have totally dressed up as Ariel at least once for a Halloween party if I were her!

She feels so blessed to have been a part of this movie that turned out to be bigger than anyone seemed to have imagined and when asked what her children thought about her being Ariel she said when her son was 3 and she showed him the movie, he  didn’t want her to ‘be’ Ariel because she was mommy and Ariel was work.  So she’d have to sing to him when they were alone and if she sang any of the songs in public, he’d block his ears.  LOL  I think my girls would do the same thing after a while.   Ariel is work and I can totally relate to that.

But it was different with her daughter.  Jodi says “My daughter was different, she was totally on board with all of that.  And of course, now they, you know, they love it, they love everything Disney.  And they love my job and they’re so proud, you know, to tell their friends, that’s my mom.”  I think it would be pretty cool to have a mom that is connected to Disney in a way like Jodi is.  And I’m sure there are a lot of perks for them too.  But she did such a great job voicing Ariel, that she deserves it all.

I could go on and on about Jodi Benson as she really was so great to listen too and so inspiring but what I loved the most about her is she hasn’t taken any of this for granted and she is so thankful for the turn her life took when they cast her as the voice of Ariel.  And it is genuine.

If you missed my other posts about my Disney Planes and Little Mermaid Adventures check them out below: